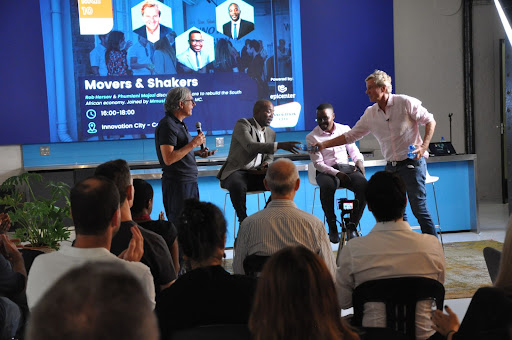 10 Mar How do we fix SA’s Economy? We have the answers!

Posted at 12:50h in Leadership by Sandra Buckingham
Share

At Innovation City we make sure to dazzle our community with amazing speakers at our weekly events, and we sure didn’t disappoint with Thursday March 10th’s lineup! I mean, who can actually brag that the potential future president of South Africa chaired their event?!

Our biggest audience yet listened to entrepreneur and private investor Rob Hersov, business and macroeconomics analyst Phumlani Majozi, and Mmusi Maimane have a good go at answering that ever-important question on every one’s mind: How do we go about fixing the SA economy? Answering this question took the debate from unpacking the failures of Eskom and the SA government in general, to the outright Libertarian view delivered by Hersov: We don’t need government at all!

Majozi lamented that parastatals like Eskom have made too many reckless decisions for far too long. Hersov said the reason why our government is a failure is because the ANC still believes that Socialism can truly work; an opinion their cadres gathered from the ‘misfortune’ of getting an education in the USSR! And this means that an education without the inclusion of economic history fails the people of SA; it stifles their ingenuity and dynamism.

Maimane didn’t quite agree that having NO government is the way to go, but he did agree with Hersov’s point about the need for structural reform, and spoke about how there is a dire need to turn SA into an efficient economy,  by focusing on the informal sector and working alongside entrepreneurs, not against them.

Hersov added that foreign investment is definitely possible, if only everything in SA wasn’t so over-regulated, or entry into market so complicated (Hersov wants to see the relaxing of laws against giving Visas to foreigners), but mostly, investment comes with a trust in government, which no one really has, and for good reason.

Fixing SA’s economy will ride on incredible tech advances, particularly in the Medical, Financial and Education sectors. The African continent has ample human capital, and technology is set to change lives like we’ve never seen it before!

Maimane closed off the thrilling debate with a thoughtful look at our value system; in order to change the injustices of the past that are still permeating our society, whether via privilege, race or sex-based, we need to become a values-based society in order to prosper.

Finally, it is VISION that we are lacking: According to Maimane, no-one currently in power seems to be able to say what they want to see in SA in ten years’ time. What kind of graduates are we currently shaping in order to fix the SA economy? We SHOULD be focused on educating and supporting entrepreneurs.

And that’s exactly what we at Innovation City intend on doing!