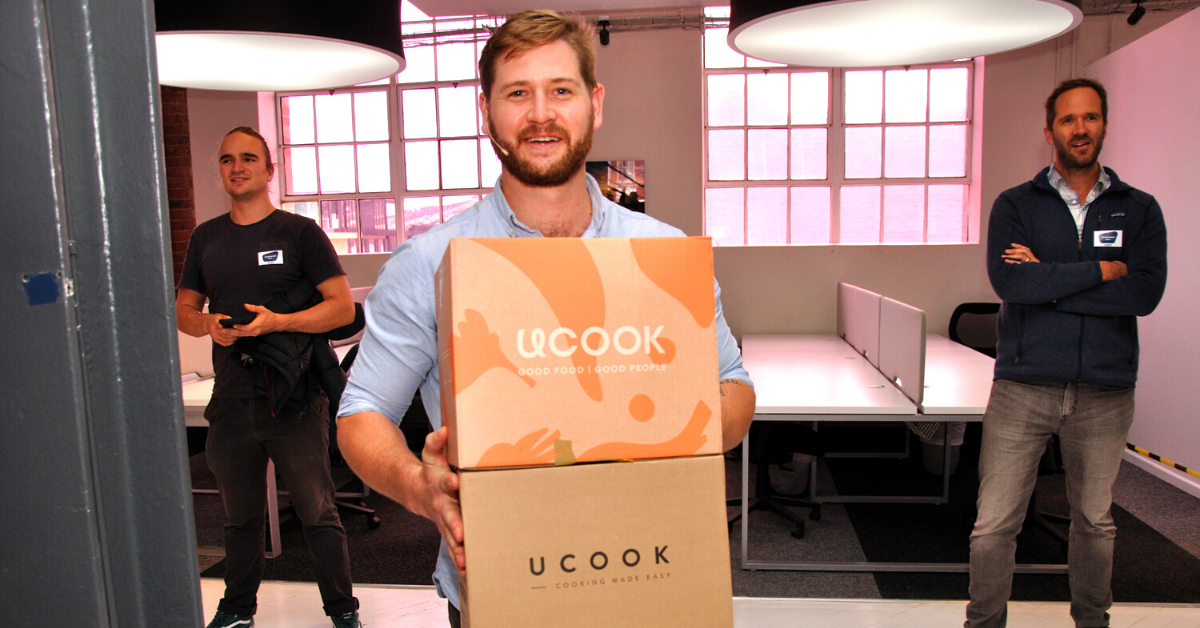 In February 2022, South African meal kit delivery startup UCOOK was fully acquired by Silvertree Holdings in a deal worth R187 million (US$12.3 million). Founded six years ago on borrowed money from family and operating from a garage in Newlands, this dinner kit delivery service provides ingredients for a variety of delicious meals straight to a user’s doorstep.

The deal saw co-founders David Torr, Christopher Verster-Cohen and Katherine Barry hand over the executive reins to Silvertree’s Peter Allerstorfer and his team. Torr and Allrstorfer joined us at Innovation City for a cooking demonstration by UCOOK’s NPD head chef Deon Huysamer, as well as chatted to the audience about the incredulous success they had with a business operating during a global lockdown.

“Lockdown provided a unique confluence of the perfect place where people were bored, but also afraid to venture out. The timing was serendipitous. It made anecdotal sense as we were quite in touch with what was going on abroad, we looked at Yuppie Chef and their success and wanted to grow holistically,” Torr said.

Torr and Verster-Cohen conceptualized the idea while living in Thailand and craving Western-style food. There are many options of meal-kits and various menus for all ages and palates on the UCOOK site, and the company also boasts the use of ethically sourced ingredients.

Silvertree’s Allerstorfer co-founded Zando and Jumia Nigeria, but before these online retail successes, the company started small and from the ground up:

“It was an amazing learning curve to try and build success in this particular space. We felt we were building a business, but didn’t own it.The mandate was to do investments but also to start companies, particularly focused on online with massive outtake. With UCOOK we got just that; during lockdown, we had to limit orders and cap it – it was all very positive!” he said.

Torr expressed their initial surprise at Silvertree’s interest, particularly as his first meeting with Allerstorfer wasn’t exactly the smoothest:

“We weren’t functionally fit to rock ‘n roll so it was an exciting prospect, and it actually happened on a fortuitous evening. We offered to do their year-end function and we nailed it. As festivities go, I had had way too much to drink and I cornered Peter and we had this conversation about what UCOOK could be. In a moment of enthusiastic explanation, I spilled a whole glass of red wine all over his white shirt!” Torr laughed.

When asked whether the company is currently profitable, Allerstorfer said: “We currently do 4000 boxes a week with 6 meals per box. Are we profitable? We could be, but not right now. We are still investing in future growth.”

Torr admits he learned a lot from this process: “In the early stages, it was a whirlpool of close acquaintances. There was no functional understanding; we had to develop and work through systems and processes, and begin to understand what made a product work. The lesson I took away from this was to spend more time hiring the right people and not pulling on board the wrong people just because they were friends or family,” he said.

Allerstorfer, who has been investing and developing businesses for the past ten years offered sage advice on entrepreneurship: “To stay in a business, you have to know it’s going to be hard work and there are a lot of ups and downs. You need persistence and brilliance, and the ability to take a knock and stand right back up. It’s not a sprint, it’s a marathon,“ he said.

And Torr agrees: The question to ask is what drives you? Entrepreneurial experience shows you something that is very unique. It’s a test to challenge and discover. Also, make sure that what’s driving you is emotion and raw tenacity, and to not just be guided by financial principles; money should not be the emotional impetus to take you through the startup journey,” he said.

UCOOK’s future looks bright with Allerstorfer at the helm. Torr couldn’t be happier with the outcome, with plans to spend time on other entrepreneurial endeavours. “Peter is a great executive with a keen eye for detail. I look forward to watching from the sidelines as UCOOK explores new avenues,” said Torr.